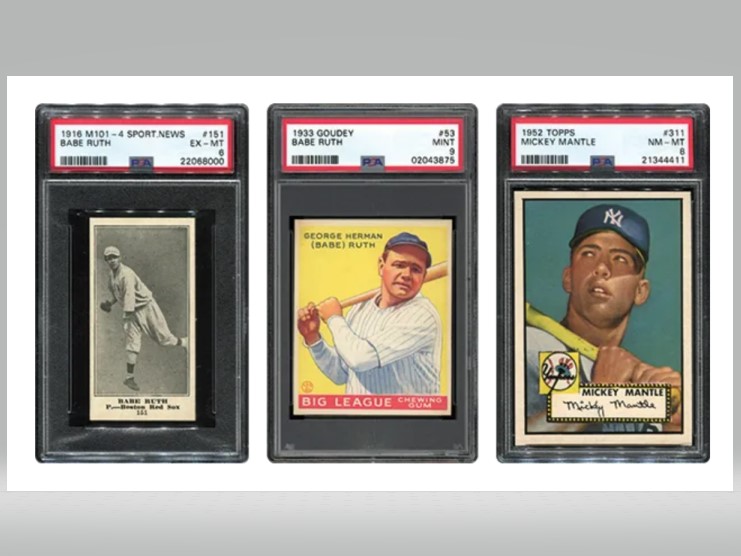 (Tampa, Florida) May 17, 2021 – The extensive collection of old baseball cards passionately assembled over four decades by Tampa, Florida neurologist Thomas Newman, who died at age 73 this past January from COVID-19 complications, has now been estimated to be worth over $20 million. Some of the one-of-a-kind cards and sports memorabilia date back to the 1880s.

Historic collection of Dr. Thomas Newman, who died of COVID-19, is valued at $20+ million, according to sports auctioneer Memory Lane. “He began avidly collecting in the early 1980s to replace the treasured cards of his youth his mother had tossed out.”

“One of the 1933 Babe Ruth cards (Goudey #53, PSA 9) in this collection is the finest known of its kind and we expect it to break the record of $5.2 million for any sports card. Prices for rare, historic items have exploded in the collectibles market,” said JP Cohen, President of Memory Lane Auctions (www.MemoryLaneinc.com) in Tustin, California. The firm will be offering more than 1,000 vintage and modern baseball, football and hockey trading cards and other sports memorabilia from Dr. Newman’s estate in an online public auction that will begin June 21 and end on July 10.

“No one enjoyed collecting more than Tom,” said his widow, Nancy Newman. “He jokingly called his cards his ‘paper babies,’ and spent almost every day attending to his collection in one way or another. It gave him such pleasure. The only reason he would ever sell a card was if he had acquired the same card in a higher grade.”

Dr. Newman’s son, Stewart, said as a youngster in the 1980s he happily traveled each summer across the country with his father to attend the annual National Sports Collectors Convention. “The only downside is that I never got a lunch break because he was on the go from the minute we entered the convention hall,” he recalled.

“MY DAD BEGAN COLLECTING IN THE EARLY 1980S STARTING WITH BASEBALL CARDS FROM 1957 AND 1959 WHEN HE WAS TEN TO TWELVE YEARS OLD. THOSE WERE REPLACEMENTS FOR THE TREASURED CARDS OF HIS YOUTH THAT HE KEPT IN SHOEBOXES AS A YOUNGSTER AND THAT HIS MOM LATER THREW OUT,” EXPLAINED STEWART NEWMAN OF FORT LAUDERDALE.

In addition to Babe Ruth items dating back to his 1916 Sporting News rookie card, other highlights of Dr. Newman’s collection include a near-perfect 1952 Mickey Mantle rookie card (Topps PSA 8) that is expected to sell for more than $1 million. He purchased it in 1986 after it was discovered that year in an original case of 1952 Topps baseball cards in Massachusetts.

Other highlights of the collection include some of the finest known examples of other Hall of Fame players including Ty Cobb, Lou Gehrig, Honus Wagner, Ted Williams and Cy Young, as well as World Series program books dating back to 1903.

Some of Dr. Newman’s collection was stored at his Tampa medical offices where one room was filled with boxes of still-unopened cards from the 1980s.

The collection has been authenticated and graded by the world’s largest sports collectibles certification company, Professional Sports Authenticator (PSA), a division of Collectors Universe, Inc.

Joe Orlando, Chief Executive Officer of Collectors Universe, stated: “The Thomas Newman collection exhibits the kind of depth and level of quality that are rarely achieved. During his lifetime, Dr. Newman was a custodian of some of the most historically important cards, the iconic pillars of our hobby. Collectors now will have a once-in-a-lifetime opportunity to add a piece of his legacy to their collections.”

“If Dr. Newman paid $500 for a card he really wanted and a week later someone offered him $5,000, he’d turn it down,” explained Cohen. “He just had an unquenchable thirst for sports collectibles. He loved it all”.