ICERT CERTIFICATION SERVICES certifies vintage unopened sports and non-sports trading card boxes, vintage empty display boxes and wrappers, wax and rack packs and unique memorabilia.
“Memorabilia with an iCert certification label ensures the item has been inspected by industry experts that have integrated a process in order to determine their opinions as to its authenticity.”
VIEW THE SERVICES WE OFFER 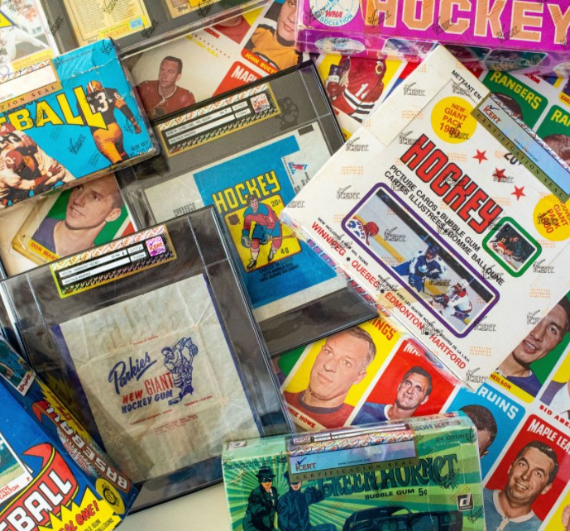 As a lifelong sports card and memorabilia collector, Elliott turned a hobby into a business by entering the trading card industry in 1988 as a retailer and wholesale distributor of trading cards and held direct accounts with all the major trading card brands at the time. He specialized, however, on Canada’s own O-Pee-Chee brand. In 1997 Elliott founded Sports Rep Marketing, which represented many NHL alumni legends for autograph appearances as well as the promotion of sports collectible shows in the Greater Toronto Area. Elliott has served on the Board of Directors of the International Hockey Hall of Fame, 2005-2013, a member of the Society for International Hockey Research and the Canadian Football Research Society. His special interest has always been vintage wax packs and boxes, especially the O-Pee- Chee brand, and has amassed an extensive collection over the past 35 years. His knowledge and experience make Elliott a valuable asset and an important member of the iCert team.

Tony Piacente is an artist by trade, producing art pieces for and of many professional athletes. Tony holds the distinction of producing the very first set of custom-painted goal equipment to be worn in an NHL game during the 1994/95 season. The goalie pads, blocker and catcher have since been donated to the Hockey Hall of Fame for display. In 1995, Tony founded SportFX International, an Official Licensee of the NFL, MLB, NHL, NHLPA, as well as numerous NASCAR drivers and NCAA Schools. Tony was responsible for the creation and production of many officially licensed products targeted to sports collectors. As part of the process, he worked closely with the league offices quality control departments. His products were also produced as regional and national incentive programs for several professional league corporate partners including Molson Breweries, Duracell International Inc. and Sunoco LP. His meticulous attention to detail and vast experience within the sports licensed product industry makes Tony a valuable asset to the iCert team.

Nathan is the owner and operator of KSA Certification, a Canadian owned and operated card and autograph certification company. Its main office is located in Elmira, Ontario with an additional office in Vancouver, British Columbia. Grading cards since 1996, KSA provides customers with quality service at reasonable prices. KSA customers have come to trust their certification accuracy and consistency which matches any of its competitors. Nathan has built his business into Canada’s #1 certification company with clients in every province and several U.S. states. Nathan brings his considerable experience and expert eye to the iCert team.

I first used iCert for my own empty hockey boxes and was tremendously pleased with the quality and speed of their service. Since then, my customers have seen those iCert wrapped boxes and either bought them, submitted their own items to iCert – or both!

I have had the pleasure of knowing Tony and Elliott for many years. In both my business and personal experience, they have been highly trustworthy, reliable and easy to deal with.

Highly competent and trustworthy. The guys provide excellent service and fast turnaround. Great experience all around.